As part of our social development programme we as a community support charities both on a local and national level. We believe that this teaches our students essential life skills such as compassion and empathy.

Charities we have supported include Children in Need, Comic Relief, Guide Dogs for the Blind and Macmillan.  We have also supported local fund raising events at Lister Hospital and The Food Shed.

Over the last few years Stevenage ESC has been supporting Macmillan's Coffee Mornings.  Supported by staff, students, and members of the local community we would like to say a massive 'thank you' to all who contribute to this event each year by bringing, and/or eating cake!  We are delighted to have raised more than £800 for Macmillan since we began supporting this charity.

Visit to the Food Shed

KS3 girls were invited to visit the Food Shed on Tuesday 11th December 2018 for a talk about the work they do and a tour of their facilities.

Run by Stevenage Vineyard Church, the Food Shed collects donations of food items which are then distributed to local people in need.  Staff and students delivered some donations (pictured) to the Food Shed and we will be volunteering at the Food Shed in January 2019.

A huge thank you to Daniel, who runs the Food Shed, for his time showing our young people around and giving them lots of information on local need.

Donations to the Food Shed from Stevenage ESC staff and students.

During the summer term 2017, we were very fortunate that Jane Shipley from ELSA came in for a day, along with some people working at Tesco, to show our young people what it is like to run a project.  We were divided into groups and our mission was to organise a fundraising campaign from beginning to end in order to raise money for a charity of our choice - we decided to raise money for the Magic of Play Appeal at the Lister Hospital. We made banners, designed a logo, and organised a charity Row-a-thon. Tesco agreed to match fund us.

We completed a 2 hour Row-a-thon in the foyer of Lister Hospital, using a rowing machine kindly loaned to us by Stevenage Leisure. The public were very generous and overall we raised £250. Tesco matched this, so our total donation to the Bluebell Ward was £500!

The cheque was presented to the Hospital on Friday 20th October 2017 by two of our students. The Bluebell Ward were delighted and have decided to use the money to buy 2 ipads, to make young people’s waiting times in hospital a little bit less boring! 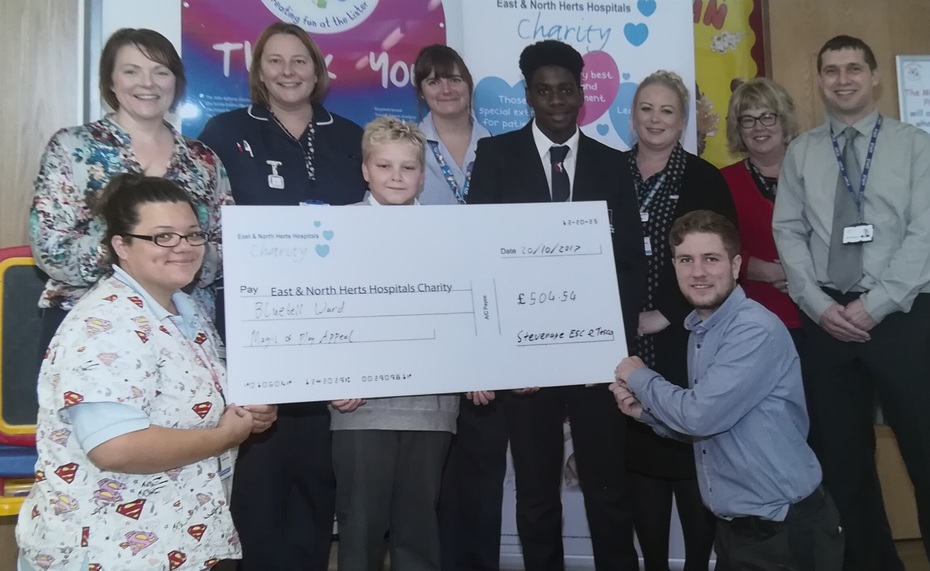